As promised in my earlier post on The Family Leader Thanksgiving Family Forum, here’s a few more observations about the forum discussion along with my highly caffeinated thoughts on how the candidates fared:

In the answers to the initial question asked them about the  words “So help me God” at the end of the Presidential Oath of Office, the candidates seemed to be all over the place in their answers. Rick Perry said that being President is the hardest job in the world, and suggested that those words were a plea and not really part of the oath. Rick Santorum said that our civil laws had to comport with God’s law. Michelle Bachmann ended up giving testimony to her personal faith in Christ before getting around to saying that when one takes that oath one is answerable to God. Ron Paul was more succinct: He said that the significance of what is promised is greater because the pledge is to God and not simply to the nation.

I was a bit disappointed with their answers not so much because I necessarily disagreed with what they said, but because it appeared that they didn’t all have a clear understanding of the nature of an oath. The reason for invoking the name of God when swearing an oath is best defined by the Westminster Confession of Faith’s chapter on “Lawful Oaths and Vows” where it says this: “…upon just occasion, the person swearing solemnly calls God to witness what he asserts, or promises, and to judge him according to the truth or falsehood of what he swears…The name of God only is that by which men ought to swear, and therein it is to be used with all holy fear and reverence…” I didn’t expect any of them to be able to give such a comprehensive answer as this, but I would like to have seen someone suggest that an oath is not an oath without invoking the name of God.

There were some points made by each of the candidates that were very good. Some examples:

On the courts, Bachmann stressed the need for limiting “subject matter jurisdiction”, utilizing Article III courts to decide what judges can rule on and what they can’t.

On illegal immigration, Perry said that it was a safety issue and an economic issue.

On Education, Santorum described the educational system as “fundamentally broken”, and denied money was the problem. He and Bachmann both stressed the need for empowering parents. 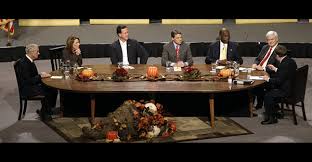 As I have already indicated, in my opinion no one at the forum really hurt themselves or got a big boost either. Bachmann’s Evangelicalism came through strongly–perhaps too strongly–but her knowledge and the ability to articulate her thoughts were well displayed too. Santorum probably had the best opportunity to get a boost from the event. He was clearly knowledgeable and passionate, and held the crowd in rapt attention as he told the personal story of his relationship with his special needs daughter Bella. Perry was much more at ease at this event than he has been in the debates so far, and his answers to questions weren’t terrible, but he still occasionally appeared strikingly uncomfortable speaking in public. Cain needed to really perform well after the trouble he’s had lately and although he didn’t fall on his face, he hit no home runs either. He choked up on two different occasions when attempting to discuss some personal issues, and it appeared the audience was generally sympathetic to him, but it’s likely that wasn’t enough to gain his lost support. Gingrich was his usual confident, articulate self, basking in the opportunity to display his thorough knowledge of history and current issues. Ron Paul didn’t do himself any favors with the crowd that was watching the forum. To be sure, it was good to see the real Dr. Paul there as opposed to the tin-foil hatted caricature of him that we sometimes hear about. But this particular audience didn’t have much use for Paul’s view of leaving difficult moral issues to the States.

It was, in the main, a good event. In a primary election season understandably so dominated by economic discussion, this was a valuable and very much needed forum.

Thousands came to see President Donald Trump at a campaign rally at Des Moines International Airport with less than three weeks to go to Election Day.
Update 10:45p: I just got off the phone with Alice Stewart.  She…
Former Godfather’s Pizza CEO Herman Cain spoke at Congressman Steve King’s Conservative…