People have a difficulty conceptualizing a trillion dollars. Here are some stats and visuals to help. Please memorize at least ONE of these to share with friends. The United States is 14 Trillion+ in debt.

-If you had gone into business on the day JESUS was born, and your business lost a million dollars a day, day in and day out, 365 days a year, it would have taken you until October 2737 to lose just ONE trillion dollars.

-It would take a military jet flying at the speed of sound, reeling out a roll of dollar bills behind it, 14 years before it reeled out one trillion dollar bills. 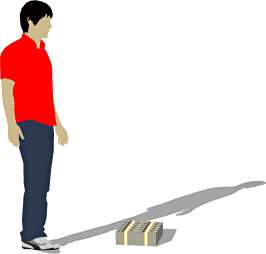 Hard to believe, but this is One Million in $100 Dollar bills (i.e. not ONE Dollar Bills, think Benjamin Franklin, NOT George Washington)

I haven’t done one of these in a long while.  Since that…
Have you heard of the technological singularity? Don’t be ashamed if you…

Shane Vander Hart looks back at 2017 and highlights our top 10 most visited articles written this year at Caffeinated Thoughts.
When  Michael Spencer (The internet Monk) recently predicted a Coming Evangelical Collapse,…